Selection may refer to: 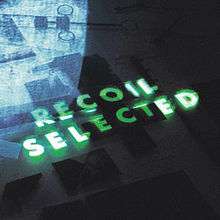 The tracks on Selected has been chosen by Alan Wilder who explained that the collection was made up of "his personal favourites, remastered and edited together into what I consider a cohesive and total listening experience." The tracks have been edited, where appropriate, by Wilder and Paul Kendall and re-mastered with Simon Heyworth at the Super Audio Mastering.

The album is available as a single CD, double CD with new remixes and alternative versions, chosen and edited together by Wilder and Paul Kendall, a limited edition 4-vinyl box, plus a limited edition deluxe 4-disc box set. The artwork for Selected was designed by Un.titled under the able guidance of Matt Culpin, with photographic work, both for the studio and live album, created by Simon Congdon.